Matt Weatherly takes over as President of Luna and Associates 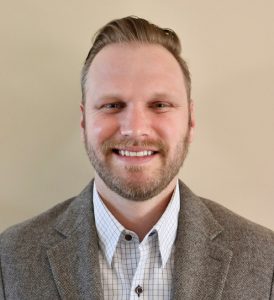 Greg Luna will continue active in the company and will remain an active Board of Director for Luna & Associates. Greg, and his wife Dawn, will be spending more time in the place they love dearly, Venice, Florida! A well-deserved dream for all the years of hard work Greg has put into the commercial roofing industry! Congratulations, Greg!!!

Denise Shibley and Rob Mulaney, also owners of Luna & Associates, will continue to lead the company to great things along with Matt Weatherly and Greg Luna.

Here’s a little introduction about Matt. Congratulations Matt! You will do powerful things!!!

Matthew Weatherly began his roofing career in 2001 with Right Roofing in Des Moines, Iowa, as a residential roof laborer and shingle applicator.

In 2005, he transitioned into the commercial roofing industry working as a service technician for Wood Roofing Company in Des Moines. While pioneering the roofing industry, Weatherly simultaneously excelled as a student-athlete at Faith Baptist Bible College in Ankeny, Iowa. In 2010,

Weatherly graduated with a degree in Biblical Counseling, but moved deeper into the realm of roofing when Wood Roofing Co. promoted him to a project management/sales position. As such, he managed production roofing projects, sheet metal projects, and sold repair work for Wood Roofing’s service division.

In April 2011, he surged into outside sales with ABC Supply, where his focus centered on selling residential and commercial roofing products to contractors in Des Moines and surrounding markets. Within a year, he had reached the top of the ranks, becoming the #1 sales representative at the ABC Supply in Des Moines location in sales volume and gross profit. Then, in the spring of 2013, he became the youngest member on the Luna and Associates team, managing commercial roofing sales in the state of Nebraska.

During Weatherly’s time as an associate, Carlisle Syntec sales grew in the state of Nebraska consistently year over year. This growth was achieved through a strategic alignment with distribution partners and a focus on tailoring solutions to the needs of roofing contractors while simultaneously engaging in the architectural community.

Matthew Weatherly became the fourth partner of Luna and Associates in May 2020 and on January 1st , 2022, he was named President of the company. With his new role, Weatherly’s focus has extended beyond the Nebraska territory and is now responsible for overseeing sales, operations and vendor relations throughout all Luna and Associates’ territories.